Parity in Programming
Back to Index

Film Fatales is excited to announce the launch of a new Parity Pipeline initiative to provide a direct pipeline for film festival programmers to connect with filmmakers from underrepresented communities. To begin, Film Fatales will be offering programmers from Film Festival Alliance access to a database of feature films directed by women of all backgrounds currently on the film festival circuit. Film festival programmers will be able to search for projects based on a variety of categories including filmmaker demographics and subject matter, and to then offer submission waivers, discounts and invitations to their respective festivals in an industry-wide effort towards more inclusive programming. 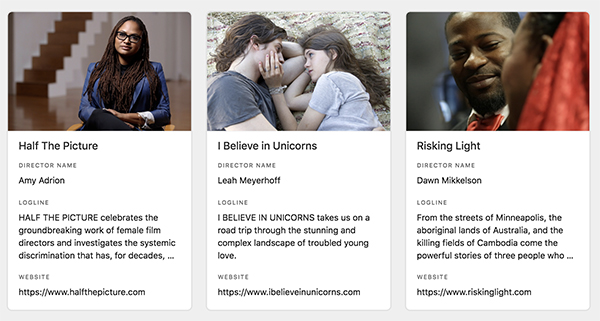 There are many barriers for filmmakers submitting to festivals, including cost, and there are many hurdles for programmers having access to diverse content, including a limited pool of submissions. This initiative is designed to help festival programmers cultivate a diverse lineup and to help marginalized filmmakers submit to more film festivals. By expanding the audience for underrepresented films, this initiative will not only serve the film festival community, but the larger independent filmmaking community as well. Contact us for more details and view a Demo here.

Film Fatales advocates for parity in the film industry and supports an inclusive community of hundreds of women and non-binary feature film and television directors nationwide. Each month, Film Fatales facilitates networking events for filmmakers in a dozen cities and hosts panel discussions and mixers throughout the year. Film Fatales raises the visibility of marginalized directors and increases the talent pool for programmers, industry organizations, and production companies looking to work with more underrepresented voices. By expanding the landscape of storytelling, Film Fatales continues to bring exciting new films to the screen.

Film Festival Alliance (FFA) is a non-profit networking organization that develops and fosters collaboration among mission-driven film festivals across North America. FFA offers resources to strengthen the film festival industry, and advocates for a sustainable and inclusive environment for film festivals and the people who run them. With a current membership of more than 150 organizations and individuals, FFA presents year-round professional development, and engagement opportunities around the country, offers valuable money-saving benefits and creates a collective community for festival professionals.