FILM FATALES x THE ACADEMY 2021
Back to Index

There are two ways to become an Academy member: Get nominated for an Oscar, or receive a special invitation. And, until this year, only five women had been nominated as directors: Lina Wertmüller (Seven Beauties), Jane Campion (The Piano), Sofia Coppola (Lost in Translation), Kathryn Bigelow (The Hurt Locker), and Greta Gerwig (Lady Bird).

Join us in congratulating our Film Fatales members who have been invited to join the Academy this year, including: 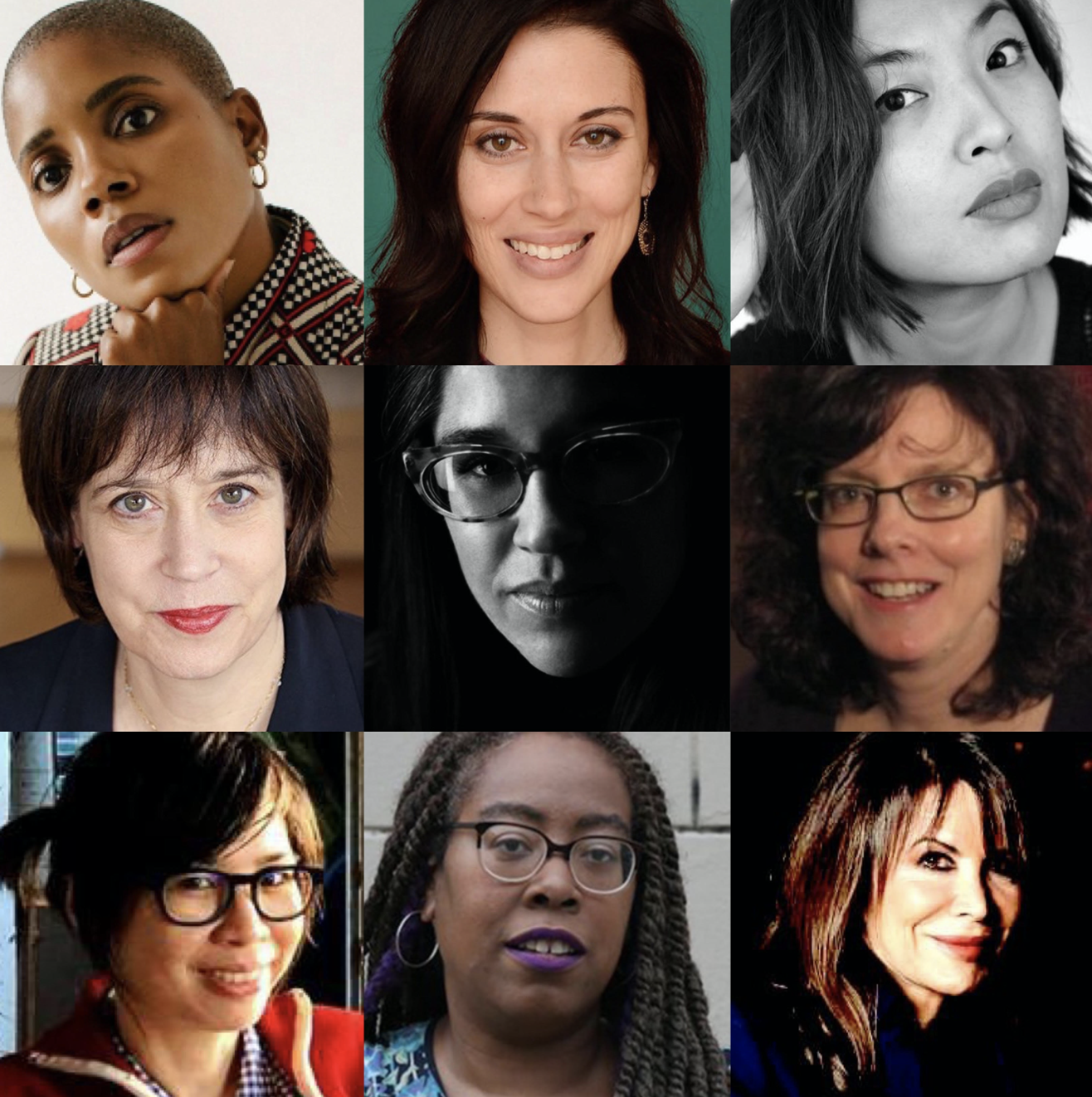 Alice Wu is a graduate of the computer science department at Stanford University. Alice spent most of her 20's designing software before moving to New York to make her first film. Her debut feature SAVING FACE premiered in Toronto and Sundance in 2005 and was released by Sony Classics. She has written projects for Paramount, Sony and Dreamworks Animation. In her spare time, she teaches and performs long-form improv at Endgames Improv in San Francisco. She is presently at work on her second feature, a coming-of-age queer teen movie called THE HALF OF IT.

Angela Tucker is an Emmy nominated producer, writer and director. She is in her sixth year as Series Producer of the PBS strand, AFROPOP and was Co-Producer on THE NEW BLACK. Previously, she was the Director of Production at Big Mouth Films, a social issue documentary production company. There, she worked on several award-winning documentaries, including PUSHING THE ELEPHANT (PBS' Independent Lens). Her directorial work includes PAPER CHASE, a teen comedy in pre production; ALL STYLES, a dance movie in post production starring Fik-Shun (SO YOU THINK YOU CAN DANCE) and Heather Morris (GLEE); BLACK FOLK DON'T, a documentary web series in its fourth season featured in Time Magazine's "10 Ideas That Are Changing Your Life" and (A)SEXUAL a feature length documentary about people who experience no sexual attraction that streamed on Netflix and Hulu for three years. In 2006, she co-founded TuckerGurl LLC, a production company passionate about telling compelling and irreverent stories about underrepresented communities. Tucker was a Sundance Institute Women Filmmakers Initiative fellow. She received her MFA in Film from Columbia University.

Betsy West is a filmmaker, journalist and professor. She and Julie Cohen directed RBG (Magnolia, Participant, CNN Films 2018) which premiered at the Sundance Film Festival. She is a 21-time Emmy Award winner for her work as an ABC News producer and EP of the documentary program Turning Point. A principal at Storyville Films, she was executive producer of the MAKERS documentary and digital project (AOL & PBS 2012), the feature documentary The Lavender Scare (2017), and the short doc The 4%: Film's Gender Problem (Epix 2016). She is the Fred W. Friendly professor at Columbia Journalism School.

Cherien Dabis is a critically acclaimed Palestinian American narrative film and television writer-director. Her feature films AMREEKA (2009) and MAY IN THE SUMMER (2013), in which she made her acting debut, both had their world premieres in competition at the Sundance Film Festival. AMREEKA went on to win the coveted FIPRESCI International Critics Prize at Cannes as well as a dozen more international awards. It was nominated for a Best Picture Gotham Award, 3 Independent Spirit Awards, including Best Picture, and was named one of the Top Ten Independent Films of the Year by the National Board of Review. Dabis is currently in development on her third feature WHAT THE EYES DON'T SEE, a 2020 Athena List winner and recipient of the 2018 Sundance Sloan Commissioning grant. The script is an adaptation of The New York Times notable book by the same name. Anonymous Content and The Population are producing. Dabis has worked extensively in television as a writing producer and director. Her credits include Showtime's original groundbreaking series THE L WORD, USA Network's THE SINNER, ABC's QUANTICO, Fox's EMPIRE, Starz's SWEETBITTER, YouTube Premium's IMPULSE and Netflix's multiple Emmy award-winning OZARK. She's a co-executive producer and director on two seasons of Hulu's critically acclaimed, Golden Globe-winning RAMY. She also has several pilots of her own in development.

Julie Cohen is an award-winning filmmaker and producer with eight feature-length documentaries to her credit. Her films include "The Sturgeon Queens," "American Veteran," and "Ndiphilela Ukucula: I Live to Sing," which won a New York Emmy Award. She co-directed the documentary feature "RBG" which had its world premiere at Sundance 2018 and has continued touring the festival circuit.

Lizzie Borden is an independent filmmaker best known for her radical feminist film, Born in Flames (1983), which premiered at the Berlin Film festival and was restored by the Anthology Film Archives in 2016. Her film Working Girls, (1986) a film about about a day in the life of women in a New York City brothel, premiered at the Director's Fortnight in Cannes and won a Jury prize at Sundance. Her first film, Regrouping, is being restored by The Anthology Film Archives. Borden's films have appeared in over 300 festivals, written about extensively and taught widely. She has worked in episodic television and has been developing projects in film, theater and television.

Miranda Bailey is a prolific producer, actor and director, known for bringing compelling and well-crafted stories to the screen. Bailey's cinematic voice was first heard when her directorial debut GREENLIT – a humorous documentary examining the hypocrisy inherent in Hollywood's "green" movement - premiered at the 2010 SXSW Festival to critical acclaim and was acquired by IFC International. Bailey's second feature documentary, THE PATHOLOGICAL OPTIMIST, follows controversial figure Dr. Andrew Wakefield. It was distributed domestically by The Film Arcade and worldwide by Gravitas. Most recently, Bailey directed her first narrative feature, YOU CAN CHOOSE YOUR FAMILY. The offbeat family dramedy premiered in the Spotlight Section at the 2018 SXSW Film Festival. Bailey assembled a decorated cast including Grammy-nominated comedian Jim Gaffigan, Emmy winning actress Anna Gunn, actress Samantha Mathis and rising star Logan Miller.

Nicole Kassell is an award-winning director and was recently named one of IndieWire's Top 25 Directors working in TV. Her episode of The Leftovers, "No Room at the Inn," was called The Best TV episode of 2015 by Vulture. Nicole has directed episodes of the Emmy-nominated AMERICAN CRIME, THE LEFTOVERS, VINYL, THE AMERICANS, BETTER CALL SAUL, THE KILLING, THE FOLLOWING, and RECTIFY. Nicole's first feature film THE WOODSMAN premiered in competition at the 2004 Sundance Film Festival. The screenplay was co-written by Kassell and Steven Fechter and won first prize at the 2002 Slamdance Screenplay Competition. THE WOODSMAN received a CACAE (Art House award) at the Directors' Fortnight at The Cannes Film Festival; The Jury Prize at the Deauville Film Festival; a Humanitas nomination; and The Satyajit Ray Award at the London Film Festival. Kassell was nominated for a Gotham Award (Breakthrough Director) and Independent Spirit Award (Best First Feature) and was recognized by Variety as one of ten "Directors to Watch." Nicole holds a BA from Columbia University in Art History and an MFA from NYU's Graduate Film Program. Nicole is currently adapting PRODIGAL SUMMER, based on the novel by Barbara Kingsolver, into a feature film. She is co-writing the screenplay with the author. The project won a Sloan Foundation Grant in 2013 and was selected for the 2013 Sundance Writer's and Producers Lab. She lives in New York City with her husband and two children.

Janicza Bravo has been directing and writing innovative content since her VICE produced short, "Eat!" was released in 2011. In 2014, her short film Gregory Go Boom, starring Michael Cera, won the Grand Jury Prize at the Sundance Film Festival, and Janicza was named as one of Filmmaker Magazine's "25 New Faces of Independent Cinema." With a background in theater cultivated while studying direction, costumes, and set design at New York University, Janicza fearlessly embraces new forms, genres, and technologies. Hard World for Small Things was her first turn to virtual reality, premiered at Sundance in January of 2016 and was also the highlight of Tribeca's Virtual Arcade that same year. The live-action short offers viewers a backseat to what appears to be an average ride among friends to a neighborhood deli but quickly becomes a shocking look at police violence in Los Angeles. The following year, she directed the first episode of season three for Kate Spade's hit branded content series #missadventure. The video has over seven million views on YouTube and stars the Academy Award nominated Rosie Perez and comedic actress Anna Faris. In 2018, Janicza directed Act IX of Gucci's video series The Performer, featuring playwright Jeremy O. Harris who uses clothes as a point of entry for discussing his thoughts surrounding his identity as being both black and queer. Janicza has also directed episodes for acclaimed television series, including Atlanta, LOVE, Divorce, and Dear White People, as well as recent Sundance darling, ZOLA.