Bans Off Our Bodies
Back to Index

As Florynce Kennedy wisely said "Don't agonize, organize!" Let's take our outrage to the streets, donate to local Abortion Funds, and rise up in support of reproductive justice. To begin, here are a selection of feature films directed by Film Fatales members that we recommend... 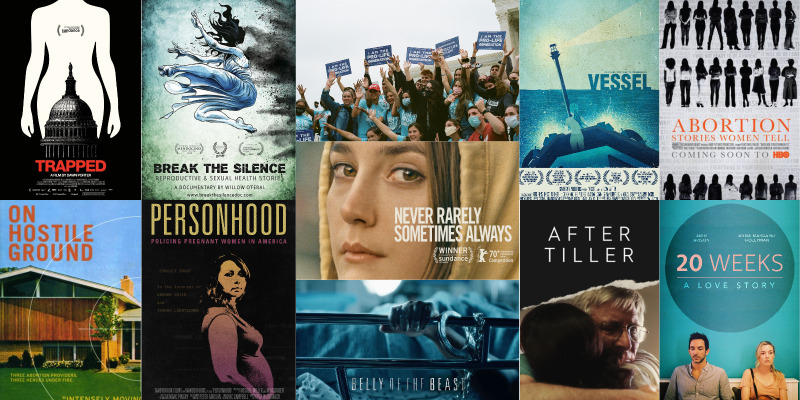 Abortion: Stories Women Tell directed by Tracy Droz Tragos
Abortion: Stories Women Tell offers an intimate window into the lives of women through their personal stories. Some are heartbreaking and tender some are bleak and frightening; some women, on both sides of the issue, find the choice easy to make due to their own circumstances and beliefs, while others simply inform us of the strength and capacity of women to overcome and persevere through complicated and unexpected circumstances.

After Tiller directed by Lana Wilson and Martha Shane
Since the assassination of Dr. George Tiller in Kansas in May 2009, there are only four American doctors left who openly provide third-trimester abortions. After Tiller paints a complex, compassionate portrait of these physicians—Dr. LeRoy Carhart, Dr. Warren Hern, Dr. Susan Robinson and Dr. Shelley Sella—who have become the new number-one targets of the anti-abortion movement, yet continue to risk their lives every day to do work that many believe is murder, but which they believe is profoundly important for their patients' lives.

Battleground directed by Cynthia Lowen and Rebecca Stern
Set against 2020's political and social turbulence, 'Battleground' follows three women who lead formidable anti-abortion organizations, tracking them through the most crucial turning point in the history of abortion in nearly 50 years. The film explores how the pro-life movement is using the enormous power they've coalesced to drive national policy at the highest levels. From the March for Life to the passing of Justice Ginsburg, to the confirmation of Amy Coney Barrett and the election, this timely feature documentary offers a front row seat on the immense influence abortion has on America's political battlefield.

Belly of the Beast directed by Erika Cohn
When an unlikely duo discovers a pattern of illegal sterilizations in women's prisons, they wage a near impossible battle against the Department of Corrections. Filmed over seven years with extraordinary access and intimate accounts from currently and formerly incarcerated people, Belly of the Beast exposes modern-day eugenics and reproductive injustice in California prisons.

Never Rarely Sometimes Always directed by Eliza Hittman
Written and directed by Eliza Hittman, the film is an intimate portrayal of two teenage girls in rural Pennsylvania. Faced with an unintended pregnancy and a lack of local support, Autumn (Sidney Flanigan) and her cousin Skylar (Talia Ryder) embark across state lines to New York City on a fraught journey of friendship, bravery and compassion.

On Hostile Ground directed by Catherine Gund
Their ranks are shrinking. On Hostile Ground enters the lives of three abortion providers to reveal the obstacles (practical, legal, and emotional) that they face everyday, and shows their struggles with the decision to perform this procedure. It allows providers who work on hostile ground to tell their stories by being themselves, without the help of a narrator.

Personhood directed by Jo Ardinger
With the rise of the “fetal personhood" movement, comes dangerous new laws that treat pregnant people as second-class citizens. This widening web of laws encourages the surveillance, policing and criminalization of women during pregnancy. As a result, prosecutions for miscarriages, stillbirths, and using drugs while pregnant are becoming widespread. Personhood: Policing Pregnant Women in America brings the human impact of these policies into the light through the story of a rural Wisconsin mother who was jailed after telling her doctor about her occasional pre-conception drug use. Tammy Loertscher's first-person narrative and recently unsealed court recordings provide a rare glimpse into these closed-door proceedings that have impacted thousands of American women.

Trapped directed by Dawn Porter
Trapped goes to the front lines of the controversial battle currently being waged over so-called TRAP laws — Targeted Regulation of Abortion Providers — which reproductive rights advocates believe are designed to restrict access to abortion. Told through the eyes of doctors, clinic owners, and staff in Alabama and Texas who are fighting to keep their facilities open, the film reveals the impact of the hundreds of new laws passed since 2011 that set additional standards and regulations for abortion providers. Compliance often requires costly facility modifications or staffing requirements and has resulted in the closure of many clinics.

Vessel directed by Diana Whitten
Vessel begins with a young doctor who lived by the sea, and an unlikely idea. Rebecca Gomperts, horrified by the realities created by anti-abortion law around the world, felt compelled to challenge this. Her method: to provide abortions on a ship in offshore waters.